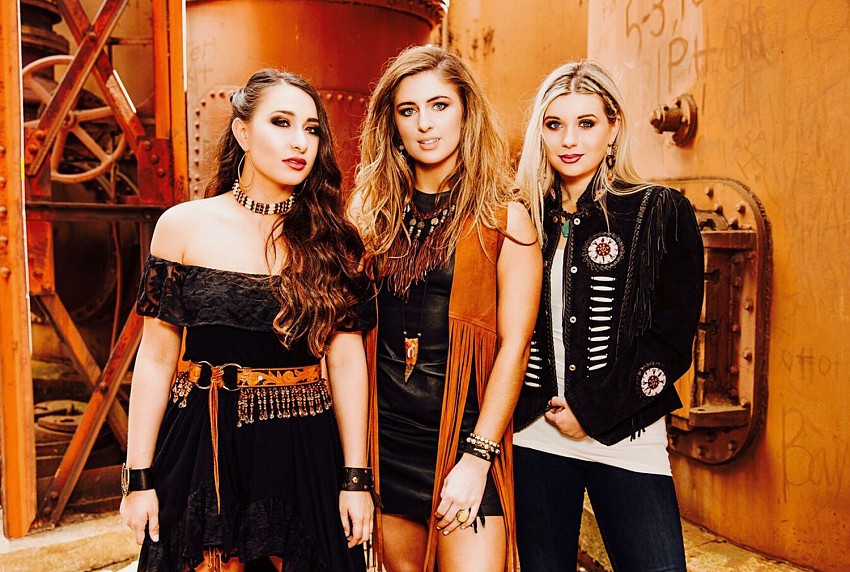 Alabama natives and rising country group Sweet Tea Trio began 2018 with a bang opening for the iconic Kid Rock on January 19th playing to a packed house at Nashville’s Bridgestone arena.  What would be truly unforgettable, was that earlier that evening  Savannah Coker, Kate Falcon and Victoria Camp, (ages 18-20), better known as Sweet Tea Trio, would add their signatures to a joint venture management agreement between Robert Ritchie (aka Kid Rock) and Ken Levitan (founder and head of the powerhouse Vector Management).

Ritchie/Kid Rock explains, “These young ladies are some of the most talented, kind hearted and hard working singers and players I have ever met. At their young ages they are already becoming fast scholars of the road and writing songs. In my opinion they pick up where the Dixie Chicks and Pistol Annies meet. They are 100% country and I look forward to sharing my 30 years in this business to get them an honest shot at the big time.“

Interestingly, Levitan managed Kid Rock at the beginning of the artist’s career right through his meteoric rise. They parted ways professionally after five years, but they remained friends and were always open to working together again. Kid Rock discovered the girls through an internet video of the Trio singing a song they had written for the annual Deer Expo called Hunt’n is Good. He extended an invitation to them to join him as a guest and performer on last year’s eighth annual Chillin the Most Cruise, where his fans fell in love with the group.

Sweet Tea Trio completed an impressive 2017 with nine arena dates opening for, and performing with, Kid Rock in Michigan and Indiana. They were also chosen by LiveNation to be the opener for Bon Jovi in Birmingham, AL and wowed fans at the CMA Music Fest in Nashville.

“The three of us feel so honored that Kid Rock and Ken (Levitan) have given us this incredible opportunity. The entire team at Vector and Lost Highway feels like a family and we cannot wait to see what the future holds. We give all the glory to God and we are so excited! We love our country music family and are looking forward to making music, hitting the road, and hopefully giving country music a sugar rush!”, says Sweet Tea Trio.

The Trio’s self titled EP debuted on the i-Tunes Country Chart at number 11 this past June and has delighted audiences and impressed the country music industry alike. The EP was produced by Jason Wyatt (former lead singer of The Lost Trailers) with Executive Producer Matt Rovey (Craig Campbell, Dean Brody). The Trio have two original songs on the six-song project; the other songs are written by top Nashville writers including Josh Kear, Mark Irwin, Brandi Clark, Shane McAnally and Josh Osborne.

Sweet Tea Trio have set their sights on California, opening for the legendary country group Alabama later this month in Ontario, CA and will be performing several dates with Kid Rock on his current tour.

-More- Originally from Alabama, the now Nashville-based trio met in 2013 through a Birmingham artist development program called Nashville Bound. Each artist sang individually when they initially entered the program but quickly felt an instant vocal connection once they sang together. The Trio has been performing together ever since.

They made their national television debut singing at the Talladega Superspeedway, and have shared the stage with acts such as Lonestar, Tracy Lawrence, Scotty McCreery, Diamond Rio, Drake White, Shenandoah and others. The trio were named Alabama’s Country Female Artist of the Year for 2016.  In 2017, they were chosen by LiveNation to be the opener for Bon Jovi in Birmingham, and they performed six shows as a special guest of Kid Rock on his eighth annual Chillin’ the Most Cruise.

In July of 2013, the trio had an opportunity to sing at the World Deer Expo in Birmingham, AL.  They entered a vocal competition and won the “Do You Have the C Factor?” - a spin off of  X-Factor but related to country music.  This first place win gave them the opportunity to compete at the Midsouth Fair, one of the largest and longest running talent competitions in the world.  Past winners and finalists of this event include most notably Elvis Presley, Patsy Cline and Justin Timberlake.  After only singing together for a few months, Sweet Tea Trio came away from the Midsouth Fair with First Place Sweepstakes Winner in September 2013.

During their exposure at the World Deer Expo, the trio was asked to write a song for the company,  Huntin’ is Good.  This was their first song to garner major attention from the hunting industry.  Their performance and professional skills landed them the chance to sing at the annual Country Goes Hunting event, in Blakely, Georgia in March 2014 and 2015 which includes national country artists and songwriters.

2014 became a very fast paced performance and songwriting year for the trio. They were gathering fans everywhere they went. They performed at festivals, fundraisers and locations around the state of Alabama as well as in Nashville and were the featured music artists on a television show, Cookin’ it Wyld Style, on the Discovery network channel, Destination America.

A major achievement for the trio that year was winning the largest and longest running country music talent search in the nation - the 33rd annual Country Music Showdown for the state of Alabama and Georgia.

Their influence soon spread to Music City.  They have performed in Nashville at Rippy’s, the Bluebird Café, The Tin Roof and are frequent performers at The Row.  Mike Peck, the booking agent for The Row, has said, “They are the best I’ve seen in a long time and should be on a fast track for much bigger things.”

Sweet Tea Trio has always believed in the power of their fans to help share their story.  They appeal to the very young, littlest fans to those that are still young at heart, who know a good thing when they see it.  Their fans and promoters not only love the music but always have a complimentary word to say about the amazing energy and enthusiasm that Sweet Tea Trio brings to the stage. They also share how kind and authentic the trio is, noting how they take the time to meet their fans, sign autographs and share stories.  Sweet Tea Trio knows that it’s these moments that make them feel blessed to get to do what they love.